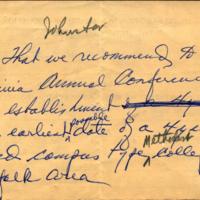 The founding of  Virginia Wesleyan College began with an effort by the new Norfolk Methodist District Superintendent, the Reverend Dr. Joseph S. Johnston, to obtain denominational approval for a Methodist-related college in the Hampton Roads area.  He saw an opportunity to link financial support for a new college to an already-planned capital campaign to raise pledges of support for Virginia Methodism's existing colleges and Wesley Foundations.  Timing was important, and solicited letters of encouragement for a new college during 1959-1960, followed by surveys of potential enrollment and financial support, led to resolutions of endorsement by appropriate church committees and boards and a vote at the June 1961 Virginia Methodist Annual Conference to establish Virginia Wesleyan College. With a charter granted by the Commonwealth of Virginia the following month, the College existed on paper, just two years after Dr. Johnston's initial effort.  But much work remained before the College could open, initially anticipated for 1964 but realized in September, 1966.

From a charter to the beginning of classes 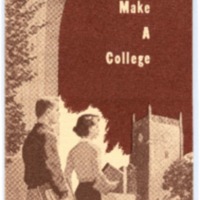 From Virginia Wesleyan's chartering in 1961 until early 1965, a year prior to opening, the College consisted of the Board of Trustees.  Dr. Johnston served as chairman of the Board from 1961 until 1964 and in early 1965 was chosen to serve as the College's first president.  By then the trustees had acquired the Smith farm astride the Norfolk/Virginia Beach border as the campus site, had approved the academic village design concept proposed by the architects, and  had hired the first academic dean and chief development officer.  A ceremonial groundbreaking in July, 1965 preceded the beginning of Village I construction, even as fundraising  proved difficult and the projected opening enrollment was reduced.  Community interest in the birthing of a new college remained high, and in September, 1966 Dr. Johnston's successor as president, Lambuth Clarke,the several other administrators and the  dozen first faculty members welcomed the 75 freshmen who became Virginia Wesleyan's pioneer students.

The first days of operation 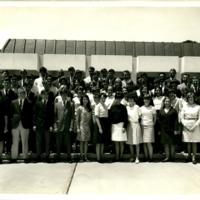 Across the country, as Virginia Wesleyan opened in 1966, higher education was experiencing many examples of lifestyle transition.  The original VWC students were required to attend weekly chapel and assembly sessions.  Required  evening-meal attire included dresses or skirts and blouses for women and coats and ties for the men students.  Those policies were eased within a year or two, as was the requirement that women students must "sign out" before going off campus.  The original curriculum focused on freshman-level courses, with few electives available, and social activities centered around parking-lot basketball hoops, a mimeographed student newspaper, a college choir, and television watching in the two student lounges. While the limitations of smallness and newness were frustrating at times, they were balanced by the opportunity to form close ties of friendship and to help create a long list of campus "firsts." 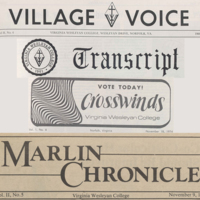 Discussion of politics at Virginia Wesleyan has been a part of campus life from the beginning. Throughout the years, students and faculty have been engaged with current events in multiple ways. Nationally, this was a time when students debated civil rights, the war in Viet Nam and the draft, voting, and Watergate.  The presence of international politics, an active student body, the importance of the freedom of speech, and protests against apartheid characterize political discourse at Virginia Wesleyan from the years 1966 to 1978.