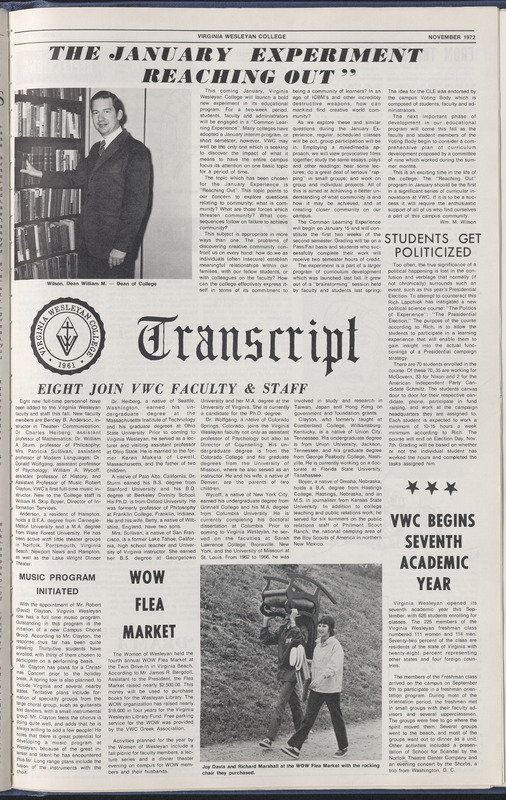 In the November edition of Transcript in 1972, Rich Lapchick, who at the time was a political science professor at Virginia Wesleyan, started a political science course where students worked for different campaigns in the 1972 presidential election. Seventy students were enrolled in the course and would canvas door-to-door for their respective candidate,  participate in fundraising, and more. Lapchick wanted to get students to "participate in a learning experience that will enable them to gain insight into the actual functionings of a Presidential campaign strategy."

The November 18, 1974 edition of the Crosswinds, assistant professors of political science invited members of Cesar Chavez's United Farmworkers to discuss what the group was trying to accomplish. In a very short time, that meeting sparked membership from five percent of the student body population who wanted to be a "liaison" for those wanting to combat injustices against migrant workers. The December 4, 1974 publication of Crosswinds describes the tasks of the newly formed group. 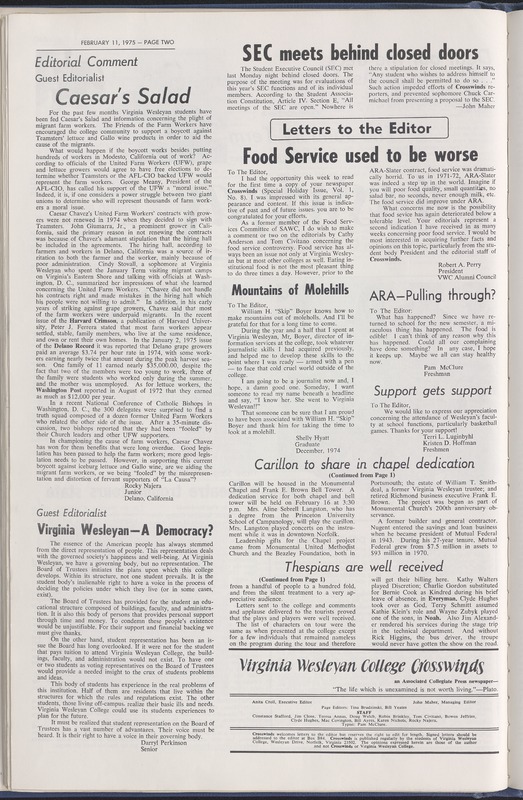 In the February 1, 1975 edition of Crossroads, Darryl Parkinson expressed that the essence of American people stems from direct representation of the people but argues that Virginia Wesleyan has a governing body with no representation. He says that students have no say in the decisions made by the Board of Trustees. Therefore, he felt students need one or two of their own "voting representatives" on the Board of Trustees to provide insight into "student problems and ideas." 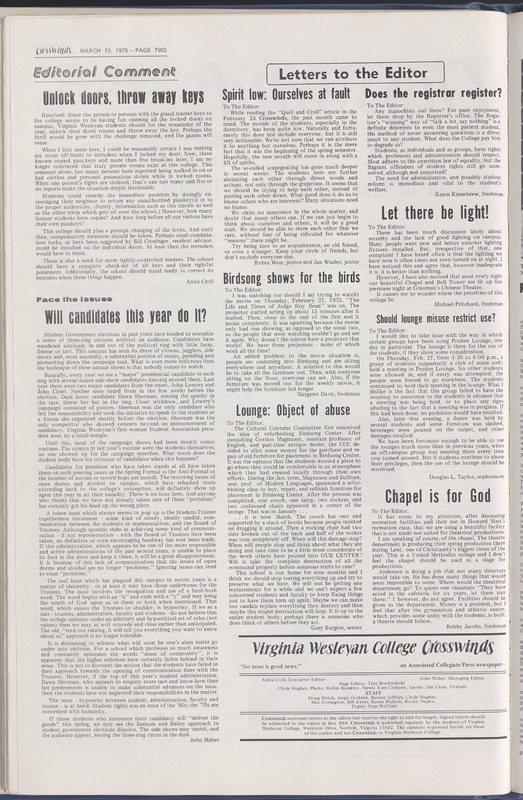 In the March 10, 1975 edition of Crosswinds, John Maher felt the student elections at Virginia Wesleyan were not helpful to students. He believed the college "operated under an arbitrary and hypocritical set of rules (not values)." He wished for the state government to actually represent the issues of the student body. 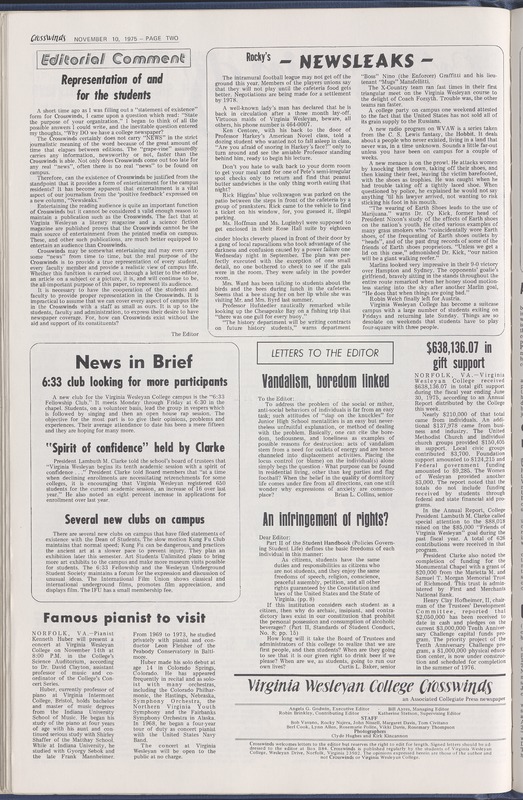 The November 10, 1975 edition of the Crosswinds, saw Curtis L. Baker fighting for the personal possession and consumption of alcohol by students. Baker asked if students could have so many rights such as the freedom of speech, religion, and commerce, why do "archaic, incipient, and contradictory laws" exist in the college that prohibit the "personal possession and consumption of alcoholic beverages". He wondered when students would run their own lives,  be recognized as people first then students, and be given their right to drink beer as they please. 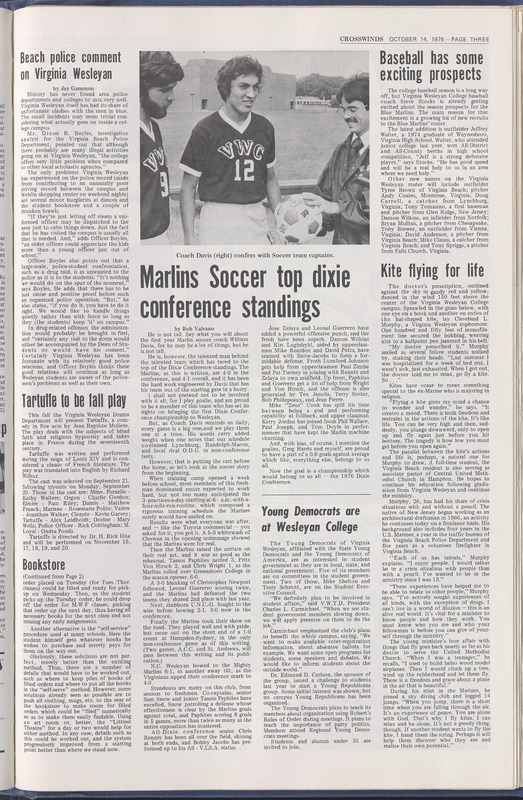 The October 14, 1976 edition of the Crosswinds show that the Young Democrats were formed in 1976. The group wanted to make voter registration information available, host speakers, and hold debates. They wanted to inform people about the outside world. Students and alumni who were under 35 could join. Dr. Edmund D. Carlson wanted to start a Young Republicans group as well and there was some interest, although not enough to start the group. 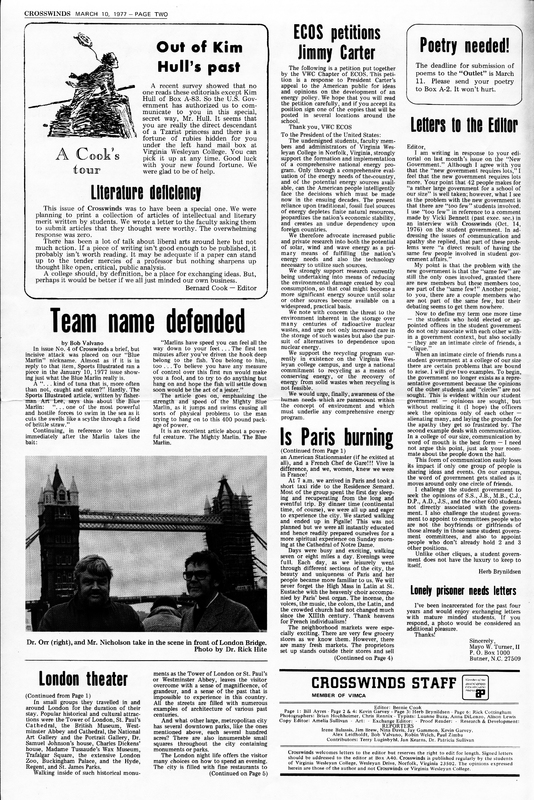 The March 10,  1977 edition of the Crosswinds show that the VWC chapter of ECOS petitioned President Jimmy Carter of the United States in response to Carter's appeal to the American people for the ideas and opinions on the development of energy. The group said they supported a comprehensive national energy program. They believed America could not rely on fossil fuels which deplete natural resources, harm economic stability, and create an undue dependence on foreign nations.